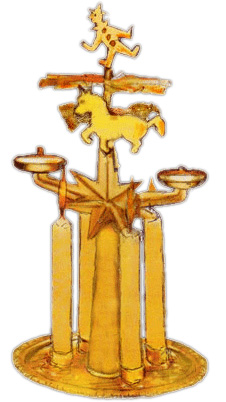 This Candle Party Chimes is what puts "life"and a novel centerpiece they will talk about into any candlelight party.


Christmas parties have long been familiar with the Angel musical chimes. animation top right. Also NEW and now available is the Santa Sliegh with deer figures.

The Standard Party Chimes figures is the Circus Clown and Merry Go Round Horses. We will have many new party figure kits for your chimes for the 2013 Holiday season including a birthday sensation and they can be added, tripling the use of your musical chimes.

Most popular candle color for chimes for the Christmas season is white most popular followed far back by red. Green, Purple and blue are also in the running.

Year around parties you can now liven things up with a festive mixture of colors, since we now make the candles avaialble in boxes of assorted colors. Order page for chimes candles, here, addition, we have been offering a Party Chimes figures kit that makes the chimes good to use year around, circus horses ($3.00) go here, and clown top plus a new figures kit, especially developed just for birthday parties coming out this fall.